Here is our updated list of NT fishing tours, boat hire and accommodation for 2018. Bookmark this page if you are planning an NT fishing trip.

Note that fishermen taking bluewater charters out of Darwin can stay anywhere in the city as it is invariably a short trip to where charter boats embark.
Most barramundi tours also leave from Darwin, although there are some regional operations.
A more expensive but preferable option is to stay on a mothership at the fishing location. This puts you on the creeks early.
If touring in a vehicle, consider a stay in Katherine, 350km south of Darwin, central to the Victoria, Roper, Katherine and Daly Rivers.

The NT’s Million Dollar Fish promotion runs each year from October to February, with 100 x $10,000 tagged barra! And a $1m fish …
Karumba fishing accommodation on the lower Gulf of Carpentaria, NQ, is listed at the bottom of the page.

If you have a group booked at Darwin Conference Centre, why not take them on a fishing trip?
Darwin is blessed with a range of great fishing options – there are half-day, full-days and multi-day trips available – all great for team building.
Groups can go barramundi fishing on the calm inland waters, or head out to sea for some extra excitement on the reefs.
The bonus is having a few packed fillets to take home.
If you have a large conference group, we can suggest the best plan, provide a quote, and book it for you, all backed by our 15 years experience in the NT fishing industry.
Phone us on 08 8981 0621.

The build-up season – late September to November – is when Darwin reef fishing charters are at their best.
On the inshore reefs, big golden snapper really start biting, along with jewfish.
But more significantly, the build-up brings calm weather, and that’s when the charter boats head out wide.
Wide of the NT coast is a species mix not unlike the Great Barrier Reef.
Trips at this time are usually over two or more days, as long distances are travelled.
Usually the boat heads out at night so clients can sleep on the way.
You need to book early for this sort of trip, as it is a popular time.
Expect to catch coral trout, red emperor, red bass, chinaman fish, goldband snapper, green and rosy jobfish, mackerel, tuna, sailfish, marlin … and more!
You’ll take home enough fillets to keep your family fed for ages … guaranteed!

We recently visited the Flicking Fresh Barra farm off Carveth Rd/Williams Rd on Middle Arm, near Darwin, NT. The turn-off is just past Berry Springs School, which is past the Territory Wildlife Park.

The farm has tours five days a week. It’s a hoot, I (Matt Flynn) took my toddlers there for a fish recently and they loved it. Gotta admit, I enjoyed it too, it’s as much fun as fishing wild, just different! In fact, I had to use all my willpower not to muscle the kids out of the way …

The fella running the show is called Adam, he’s a top bloke who will tell you all about aquaculture. Right now fish prices are way down, and that is why Adam is running barra tours.

The Flynn clan with Adam Body of Flicking Fresh Barra Farm, and a nice barramundi 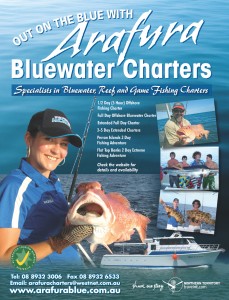 Arafura Bluewater Charters has been operating in Darwin from Cullen Bay for over a decade. They specialise in bluewater reef and game fishing charters, catering for local, interstate and international fishing enthusiasts on offshore fishing charters.

Boats
Owner operator Steve Compain has over 26 years experience fishing the NT waters and searched the nation for the perfect bluewater vessel. He uses “Mark Ellis Design” vessels. All vessels are in NT survey, and well maintained and cleaned.

Wai Nawana
Wai Nawana was launched May 2010 … she is a 52′ custom-built Mark Ellis-design vessel built in Fremantle, WA.

Wai Adi
Wai Adi was launched in May 2008, She is a sister ship to Wai Tui, with the addition of an air-conditioner.

Arafura’s liveaboard charters offer the ultimate fishing experience in the Top End and have proven successful not only with TV show hosts, but the vast majority of bookings being repeat business with clients booking for the next year and beyond.

Liveaboard charters depart at 2000 hrs. Meet the Wai Nawana (outside the lock gates) at the Cullen Bay Ferry Terminal at 1945. Be greeted by Arafura’s friendly crew and stow your gear in their air conditioned accommodation. Then settle in for a few drinks and meet the rest of the group, before getting your head down for the night and wake at the fishing grounds ready for a bacon and egg sandwich a cuppa and some awesome fishing action.

2 Day Trip
The two-day charters are usually to the Peron Islands area, approx 80nm west-south-west of Darwin. The clearer water in this area is home to the red emperor, coral trout, golden snapper, tuskfish, the mighty black jewfish, cod, and also a variety of pelagic fish, including trevally, spanish mackerel, tuna and sailfish.

This area has proved popular with several TV fishing personalities, including “I Fish” with Paul Worstling, “Hooked” with Dave Butfeild and Jason Kennedy from “Fishing Trips” has also “Stopped the bus” in these fish rich waters returning regularly on the 2-3 day charters to enjoy a taste of what the territory has to offer. Flat Top Banks and the Tiwi Islands are also possible on the 2 day charters however this is dependent on tides and weather conditions.

3 Day Trip
These charters open up a huge area of remote Territory fishing depending on weather, the time of year and tidal movement. Flat Top Bank nautical miles from Darwin is one option for the neaps (small tidal movement) and is home to huge mangrove jacks, red emperor, tricky snapper, giant trevally, spanish mackerel, with a stop at Cape Fourcroy on Bathurst Island for a session on golden snapper and black jewfish on the way home.

One the larger tides Arafura heads past the Peron Islands to the remote fish-rich grounds near Cape Scott, Emu Reef and Cape Ford, again home to red emperor, golden snapper, tricky snapper, jewfish, tuskfish and coral trout, with some trolling thrown in to give the arms a rest, and the chance to tussle with spanish mackerel, or land a trophy sailfish.

4 or 5 Day Trips
For the adventurous fisho a long steam through the night some 170nm puts you in international waters. Fishing the remote Tassie, Evans or Flinders shoals, these trips are limited to the calmest times of the year and specific tides. The fishing is world class, with fine table fish in abundance, and awe-inspiring sportsfish. Exotic species like powerful dogtooth tuna, blue trevally and wahoo, all this between the main game, goldband snapper, small and largemouth nannygai, red emperor, longnose emperor, coral trout, coronation trout, trout cod and a myriad of other species. There have been encounters with sailfish and black marlin. Again on the last morning tides permitting a stop at Cape Fourcroy on the way home for a black jewfish if your arms still work.

All tackle is provided however if you wish to bring your own gear a minimum of 50lb braid is suggested, a good jigging outfit and some Gulp soft plastics. Fillets can be taken home in the plane in an approved 10kg box. 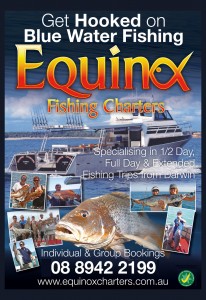 Experience a Territory offshore fishing trip you’ll never forget. Join a half day, full day or an extended fishing charter with an experienced crew who will take you to some of the best fishing spots in the Top End. Destinations include Middle Reef, Fish Reef, Lorna Shoals, Bass Reef and Charles Point.

Extended trips go to Bathurst Island, Melville Island and Peron Islands, depending on tides and conditions.

The species you will encounter include black jewfish, golden snapper, coral trout, red emperor, spanish mackerel, sailfish and more. Much, much more!

Each fishing adventure includes all meals, tackle and bait, soft drinks and water.

Equinox can also freeze your fish and box up into airline-approved freight boxes for a flight back home.

There are two vessels:

Tsar is a 11.5m Stebercraft boat. Licensed to carry 12 passengers with comfortable seating. Toilet facilities on board and a cruising speed of 21 knots.

Equinox II is a 17m Millman Maxivision fishing vessel and carries 18-20 people on a one-day fishing trip. The ultimate in deck space and a comfortable ride on any waters.

Equinox II is perfect for corporate fishing, small functions, Bucks and Hens days/nights. With the large table and seating you can even hold a meeting/presentation for up to 16 people.