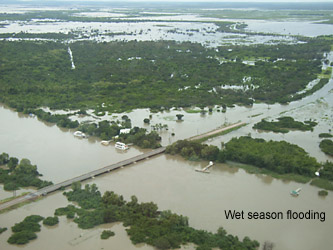 Australia’s Northern Territory has three basic seasons – the wet season monsoon (usually late December to April), the dry season (May to September) and the stormy "build-up" – the time of increasing heat and humidity leading up to the wet season (late September to December).

There is usually very little "build-down" from the wet season as the cool dry season south-easterly wind arrives almost overnight once the monsoon weakens.

What does all this mean for barramundi fishing?

Barramundi love heat. They bite really well in the build-up when it is warm, and they are preparing to spawn. But this can also be an uncomfortable time to fish unless you limit trips to the cooler mornings and afternoons, and at night.

During the early wet season the weather is often cooler but barramundi can be hard to catch as the rivers flood and the fish spread out in the floodwaters.

Towards the end of the wet season the fish tend to gather in certain areas, usually the mouths of floodplain creeks.

This is the run-off season and it is a great time to fish. A wet season that drops rain consistently from December produces better fishing than a wet season that dumps it all in one lot late in February or March.

Just after the wet season is the "greenwater" period where the rivers are full of greenish (clear by Territory standards) rainwater. This is a great time to fish because water clarity is good. Territory rivers are otherwise muddy and turbid.

Once the dry season south-easterly hits, the water in rivers and billabongs begins to cool and barramundi slow down, however they can be caught right through the year, especially during warm spells. Barramundi fishing is therefore something you can enjoy all year.

The best regions in Australia to target barramundi are the Northern Territory, the west side of Cape York Peninsula down to the lower Gulf of Carpentaria coast, and the WA Kimberley.

Of these regions, the Northern Territory offers the best combination of pristine habitat and accessibility.

The best barramundi rivers have unaltered floodplains that hold an “inland sea” of water during the wet season, letting the water slowly drain away after the wet season, leaving a series of permanent waterholes.

On the East Coast such rivers did exist, but were long ago transformed by dams and weirs, and their floodplains drained, severely affecting the barramundi populations, as barramundi require free passage from freshwater to salt each year.

Barramundi can be caught in tidal rivers, freshwater lagoons, and along coastal foreshores. They are a hardy and adaptable fish that can be found almost anywhere along the coast, although their preference is for turbid water and muddy creeks and rivers, rather than clear sandy waterways.

Barramundi tend to congregate in certain areas with the changing seasons, but can be found in any of their usual habitat at any time.

Fishermen who target big barramundi tend to fish the lower sections of big NT tidal rivers such as the Daly, Mary, Adelaide, and East and South Alligator Rivers, and some coastal creeks. Most big fish are caught just after the wet season.

The Northern Territory has excellent roads to boat ramps on most of its wild rivers, but finding barramundi hotspots on these vast waterways can be daunting.

Close to Darwin, the harbour is an excellent spot for smaller barramundi, as is nearby Shoal Bay and Bynoe Harbour. Anywhere with mangroves and tidal creeks, barramundi won’t be far away. A bonus in the NT is that gill nets have been banned from many areas.

The Northern Territory has a stocked dam which provides good fishing at times. Manton Dam is about an hour’s drive south of Darwin, and is a picturesque and safe place to take a family barramundi fishing.

Billabongs are popular venues for mostly smaller barramundi, which are caught in a setting among lillies and loads of wildlife. Billabongs also hold freshwater sportfish such as saratoga and tarpon. Never be tempted to have a swim though as big crocodiles are abundant in the NT.

Barramundi live in a great range of habitats and therefore fishing methods are varied. Most fishing takes place in the salt water and the NT’s tides have to be taken into account.

Barramundi fishing is usually best in early morning, late afternoon and at night. The best tide is usually the last three hours of runout and first two hours of run-in, when barramundi and bait are forced out of the mangroves and into mud drains and tidal flats.

The most popular way to catch barramundi is on lures. Some people use live bait to tempt them but this is considered unsporting by some. 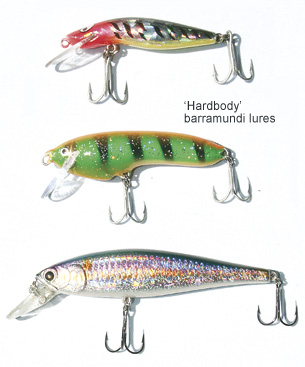 Lures are usually trolled or cast to likely places, which includes snags, rockbars, undercut river banks, and coastal flats where bait is being working by fish.

Lure colour and size are greatly debated but there is no doubt that some days barramundi will show preference for certain lures and colours. At times the fish will feed on a specific food item and a lure will need to imitate that item to get strikes.

Tiny lures can be useful at times, especially during the wet season run-off. Small prawn imitations are very effective in the saltwater as even large barramundi are voracious eaters of small prawns.

The main consideration is that the lures are strong – barramundi will literally tear apart lightly built lures. Fortunately there is a huge range of strong lures available specificially for barramundi fishing.

The soft plastic lures or "jellies" are very effective on barramundi. Click on the following link for more information about barramundi fishing lures. 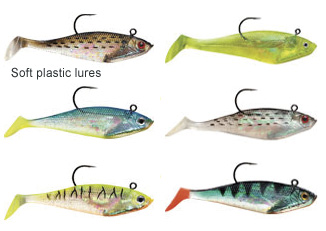 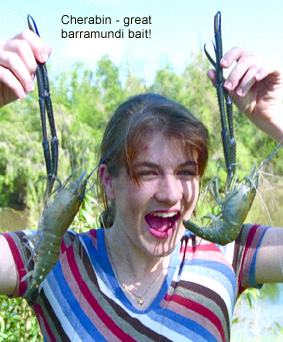 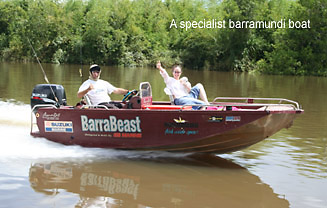 Boats of all sizes are used to go barramundi fishing, but because of the presence of large crocodiles in Northern Territory, anything under 3.7m is not recommended.

Casting platforms are very useful in a barramundi boat, as are livebait tanks, and a long-range fuel tank. However a standard 3.7m cartopper is suitable for many barramundi hotspots.

Click on the link here for more on barramundi fishing boats.

Rods and reels for barramundi fishing

Overhead casting reels are hugely popular for lure fishing. Small spinning reels (eggbeaters) work fine however and are good for casting light lures. Click on the link to find out more about barramundi fishing reels.

See your tackle shop to find a matching rod – there’s too many choices to list here, but good rods are available at low prices.

Line breaking strains today are usually 8kg to 15kg, with a tendency to use the modern braided lines. 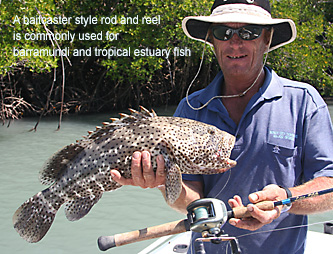 A good echo sounder can help you locate barramundi, although it is not an essential item for much barramundi fishing. A GPS unit is handy when you are in unfamiliar waters as local fishing maps generally provide GPS data.

You will need a landing net, preferably a small mesh net that will not split the fish’s fins. Many barramundi are released because the NT has strict bag and size limits and these fish must be handled carefully to ensure their survival. A measuring sticker should be attached to the gunwhales so you can see if your barra is over the legal 55cm limit.

A lure desnagging pole will help you retrieve lures that are invariably snagged while fishing the lairs in which barramundi shelter.

Sunscreen, a good hat and lots of drinking water are other essentials. 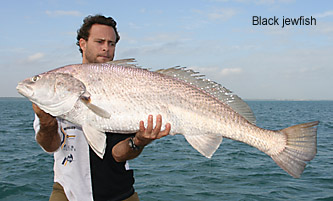 There are many good places to barramundi fishing. However the big rivers where netting has been banned are where the most big fish are taken.

These include the Roper, Mary, Daly, McArthur, Finniss and Adelaide Rivers. The South and East Alligator Rivers in Kakadu National Park have no netting and are also good fishing spots.

Other good waters accessible to the public include the Victoria, Towns, Robinson, Wearyan, Calvert and Keep Rivers.

The Tiwi Islands north of Darwin have large rivers that fish very well and the Tiwi Land Council has a permit system available through the Amateur Fishermen’s Association NT.

The remote rivers of Arnhem Land are difficult to access because the Northern Land Council rarely approves permits for fishing purposes. The fishing can be very good but not necessarily any better than the rivers where netting has been banned.

There are many other exciting fish species in the Northern Territory that live in the shadow of the famous barramundi. Living in much of the same habitat in the salt water are threadfin and blue salmon, queenfish, trevally, black jewfish, mangrove jacks, grunter and golden snapper. In the fresh water saratoga and tarpon are a popular side catch.

Salmon, queenfish, trevally and salmon-catfish are the most likely bycatch while actually lure fishing for barramundi. Other species generally have to be targeted with bait.

Most of these species are excellent to eat, and some people argue that they are better than barramundi. Either way it helps to mix your catch rather than just take barramundi.

The NT coast is also home to longtail tuna, spanish mackerel, cobia and to a lesser extent sailfish, and many of the grounds are just a short distance from the barramundi hotspots.

On any day several fish species can be caught when fishing the NT coastline. 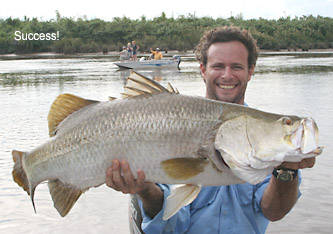