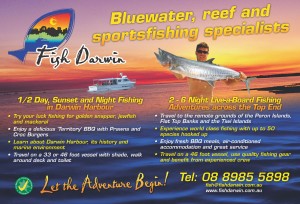 Fish Darwin specialises in reef and pelagic fishing on the exciting bluewater reefs wide of the Top End.
This report gives a good idea of what you can expect. Shannon Bubner writes: “After a year of planning, six of my good fishing buddies Swivel, Bingo, Bondy, Arky, Hannan and Rhino from Kimba in South Australia touched down on the Darwin tarmac in the early hours of the September. Anticipation was high and a tackle shop visit was on the agenda.
“Topping the shopping list were soft plastics, metal jigs and 80lb braid.
“The longest morning in history finally came to an end and it was time to board Northern Exile – our fishing platform for the next four days.
“After a 10-hour steam into the night, the anchor was dropped at Caution Point, on the west of Bathurst Island, followed closely by squid baits.
“Soon yells of delight and bent rods broke the midnight silence. Within 10 minutes there were six black jewfish slapping the deck. With two kept and four released, it had been a great start.
“Sunrise and a new day saw a three-hour steam to Marie Shoal.
“Skipper Shaun Uden searched for the best ground – the sounder lit up a couple of times with bait schools and it was time to stretch muscles again.
“Three rods with bait, two with metal jigs and two with soft plastics were deployed. Coral trout were caught on the baits and soft plastics, while some savage spanish mackerel action was taking place on the spin reels and metal jigs as we drifted over the shoal.
“A few coral trout and mackerel for the icebox and it was time for catch and release fishing, with more than 20 of the 8kg-plus spaniards swimming away.
“Some 15 or so species were ticked off the list already. Then another hot session into the sunset with more mackerel, giant trevally, maori sea perch, coral trout and the ever-present sharks – all living to fight another day.
“Then we were off to explore Goodrich Bank, north of the Tiwi Islands. Arriving at 10.30pm and seeing the sounder light up like a Christmas tree, it didn’t take long before the sound of screaming drags filled the warm night air.
“GTs to 20kg, red bass, longnosed emperor, paddletail and large cod were on the menu, readily taking baits and soft plastics. Some fishos needed sleep!
“Sunrise and flat seas welcomed us on our third day. We pulled in some cracker coronation trout, cale cale trevally and longnosed emperor. Red bass to 7kg were testing our stamina. Some cracking red emperor and another mackerel session meant an afternoon rest and cold beer was needed.
“Later, we set up billfish baits and soon enough, out of 90m, a huge black marlin trailed our skip bait before slamming it without a hook-up, only to smash a pusher as Swivel was retrieving it. There was yelling and yahooing, but after a 2½ houre battle the line parted.
“An early night and it was time to do head back towards Darwin the next morning. We stopped at some snapper ground and soon seven rods were hooked up on goldies of 4kg to 7kg.
“What a trip. Great food, great company and great fishing!”
For more information visit www.fishdarwin.com.au