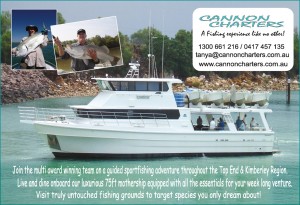 Cannon Charters specialise in mothership fishing adventures across the spectacular Top End.
The trips combine fantastic fishing with great scenery and luxury facilities.
A holiday aboard the MV Cannon is perfect for corporate bookings, or for those who love an outdoor adventure.
From Darwin, Cannon travels to remote locations to provide guests with rarely fished grounds.
There are no supermarkets, motels, restaurants, or clubs where the Cannon goes. There are often no roads in to the coast where Cannon fishes.
That’s why the MV Cannon is decked out with everything you could need for your week-long journey.
When not relaxing on the mothership, you will be out fishing and exploring in a comfortable dinghy. Travel up narrow creeks, ducking branches or dodging sandbars to access that one spot where you might just find that huge barramundi or threadfin salmon.
Return to the mothership for a delicious lunch prepared by an a la carte chef, before heading back into the unknown. Few people get the chance to experience the Cannon secret locations, as most are only accessible by long-range mothership.
Cannon Charters has been accredited with the Australian Tourism Accreditation Program since 2006 and is dedicated to providing a high level of customer service.
In 2007, Cannon Charters won the Northern Territory Brolga Tourism Award for excellence in the category of Adventure Tourism, and then went on to represent the Northern Territory as a finalist in the 2007 Australian Tourism Awards.
Winning a Brolga award is the industry’s highest accolade and the recipients represent the best products and services in the Northern Territory.
In 2008, Cannon Charters took out the Northern Territory Brolga Tourism Award for excellence in the category of Adventure Tourism for the second year
in a row.
MV Cannon
The MV Cannon is a luxury 75′ mothership built by West Coaster Marine and launched in 2003.
She can accommodate eight guests in four cabins, two with twin bunks, with separate toilet rooms. Two cabins have a double and single bed with ensuite.
All rooms have individual air conditioning, and there is an endless supply of fresh water.
The internal lounge and dining area is a modern leather setting with TV, video, DVD and stereo system, all in air conditioned comfort.
The galley is fully stainless steel, with modern conveniences and walk-in cool room.
The huge outside entertaining deck area features a three-door drinks fridge with ice-maker, a stainless barbecue, instant boiling water for coffee and tea and a separate shower and toilet. The deck has two large tables that seat eight each under a hard top.
There are four sportfishing boats to enable visitors to fish estuaries, rivers and reefs. These boats are powered by Honda BF40s. Each boat has a sounder and Shimano and Loomis gear.
For more information visit www.cannoncharters.com.au