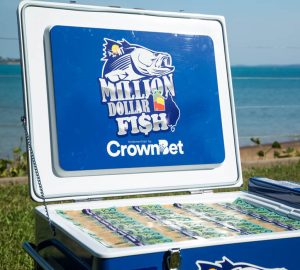 A picture is worth a thousand words … this Facebook video, by Mark Rolle of Darwin’s Helifish, shows the state of the run-off in part of the Top End, the popular Shady Camp/Mary River region. You will probably need to be signed into Facebook to see the video.

So you want to go barramundi fishing? We suggest you go to the Northern Territory, which has the best barramundi habitat in Australia.

The "best habitat" means tidal rivers with vast floodplains, and a strong annual wet season. The huge fertility of these rivers provides enough fodder fish for the voracious barramundi to thrive in large numbers.

There’s a few ways you can go barramundi fishing.

You might wish to take your own boat north, or you can fly or drive in and hire a professional fishing guide. The second option is simpler, usually more successful, and often cheaper when you take into account time spent exploring and learning when you do it yourself.

But with the 404-page book called North Australian FISH FINDER now available, with maps of rockbars, reefs, boat ramps and more, it has never been easier to plan your own self-drive fishing adventure.

Either way, a little knowledge and planning will vastly improve your chances, and this website will help you with that.

If you though this promotion was a bit of a croc and none of the fish would be caught, you were wrong!

The Million Dollar Fish comp started only in October, and four of the $10k barramundi have already been caught.

Read the story about the fourth fish, taken from Corroboree Billabong here.

There’s never been a better time to fish the Top End, with the Million Dollar Fish event running until the end of February 2016. The fish have been released across the NT, so you have a chance to catch one no matter where you fish.

Grab your copy of the northern fishing bible North Australian FISH FINDER today and start planning, or make is simple and just book a trip with a professional barramundi guide. 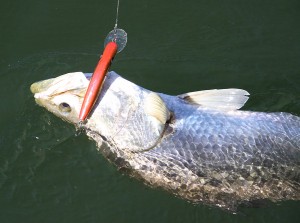 We interrupt our total lack of 2015 posts with a hugely important update … Tourism NT has launched a promotion where 75 tagged barramundi worth $10,000 each will be released into Territory waterways.

A 76th barra with $1m on its head will also be released, with fishing for the prize fish allowed between October 2015 and February 2016.

Now this is the best reason there is ever likely to be for taking the boat north, or flying up and booking a guided trip. Grab a North Australian FISH FINDER book today and start planning.

The $10,000 tagged ‘silver nuggets’ will be released across the NT, and the book has those spots covered with rockbar maps etc.

Get more info about the NT’s Million Dollar Fish promotion here. You must register to enter fish.

And by the way, the lack of posts here is because we spend most of our time these days at www.fishingterritory.com

It’s all about the tides.

That was the lesson from the Club Marine Barra Nationals 2014 on the Daly River.

During the pre-fish and the first two days of the event when the tides were at their biggest, the metre-plus barra were hunting mullet and those trolling the middle of the river were catching them.

Kane Dysart, who landed a stunning 118cm fish during the Nationals, said he caught three metre-long barra during the event’s pre-fish. Champion fisho Shane Compain had predicted that the Nationals would be won in the first two days, and he was right.

As the tides diminished to neaps later in the event, the barra caught were smaller and the bite was primarily in the morning. It will be interesting to see if organisers run the event on bigger tides in future.

The upcoming Barra Classic on the Daly will be held on building tides, so the big fish will likely show towards the end of the event.

Those fishing outside the Barra Nationals official hours found smaller barra were ravenous at night, an indication yet again that having many boats on the water during the day does put the fish down to some extent.

The question is, does the big tide rule extended to all big NT rivers? Some Top End rivers are quite different in habitat from the Daly.

The comp showed that there’s a good stock of fish in the Daly River this year, albeit not as many fish as the big flood years experienced in the Top End recently.

Fishos remember those years fondly, but they are not the norm. When the wet season rain starts in late November and doesn’t stop until April, the river barramundi fishing goes ballistic, often lasting all year, but more often than not the rainfall is not quite so co-operative and the fishing quality is average.

Average in the NT of course generally means very good fishing, and there’s always the bluewater fishing to fall back on – barra tend to distract from the NT’s excellent coastal sportfishing opportunities.

Barra Nationals 2014 results can be seen on this thread on the FFF fishing forums.