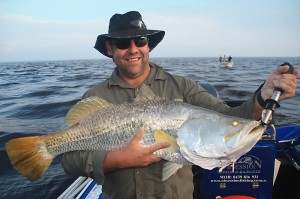 Obsession Fishing Safaris’ Justin Jones has driven back back from Point Stuart today, doing the 600km “Pine Creek detour” drive in about five hours.
He said: “All of the bitumen is in good condition with the odd pothole here and there, the only water over the road was at the South Alligator River culvert, which is running at .2 over the road.
“There were plenty of barra scales on the bridge from last night’s session.
“As for Shady Camp, the road is in great nick as it has dried out and is extremely firm, with just one or two washouts.
“The water has backed up to the start of the carpark area but there are no hassles in launching.
“All of the usual haunts around the first two barrages down from the main barrage are all under water.
“And the water is over the banks right down to Alligator Creek.
“Monday was the pick of the days with my three clients, hooking a dozen fish all around the metre mark, but only landing six of them, plus another 20 odd smaller barra
“All the big fish were hooked on 16A Bombers in gold and chartreuse.
“Both Tommycut and Sampan Creeks are pumping out large amounts of fresh water.”